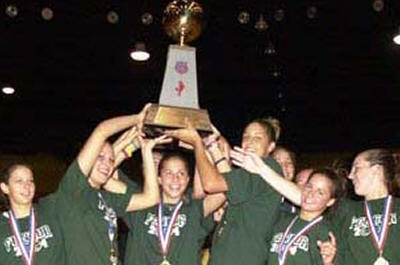 The Fencor Amateur Athletic Union (AAU) Club is constantly striving to maintain its position as the premiere not for profit organization for the development of girls basketball in the Mid-Atlantic region.

It will continue to have a positive National and Regional presence and reputation by competing at the highest levels. Fencor, which is open to all interested players, will always be known as a teaching organization that help its athletes on and off the court. This help runs the gamut from reinforcing positive values to educating the players about college opportunities that are available.

Fencor recognizes the priorities of family, religion, and school, and enthusiastically accepts its role as a basketball related complement to those important responsibilities and relationships. At the same time we value and respect the benefits of participation in the game of basketball and will continue to treat the game for what it is- a chance for players to have fun, learn to compete and to grow as individuals.

Fencor is a 501(3)C non-profit organization. No one representing Fencor draws a salary.

What does it cost to play for Fencor?

There is an initial mandatory $25 tryout fee collected along with the Registration Form. We encourage you do it on-line but can be done at the tryout. That money goes toward the expenses of running tryouts. When your daughter makes a team, you will be required to pay a Fencor Player Fee of $600 a week following making the team. You can pay online, have cash or by Venmo (@stuart-london-fencor).ALl players except 11th grade will need to purchase a new uniform. There is a cost of $165 for a home and away set.

How are the registration fees used?

We realize there is a large financial commitment to play for Fencor so we try to keep the fee as low as possible. As seen below, the fee does not cover all the costs of playing. We make up the difference with the income from holding tournaments. If, like in 2020 and 2021, tournaments do not make normal revenue, the club faces a major financial crunch.

(Please note the below breakdown is given merely as an example to show how the registration fee does not cover all expenses. There is no such thing as a ‘team budget’. The head coach sets the amount of practices and tournaments for each team.

Note: Players in grades 8-11 will receive a special rate for the 2022 Fencor/Philly Club Ball College Showcase in the fall.  You must still register by deadline.

** All other club administrative expenses and the shortfall from the registration fees are made up by tournament income – primarily admissions since scorekeeping and concessions are used by teams as fund raisers for additional tournaments.

Refund policy: All tryout fees are non-refundable. If a player is picked for a team and does not tell Fencor office or coach they do not want to participate before team is selected, the family is still liable for the fee (courts in NJ have affirmed this as legal). If for some reason a player will not be able to complete a season due to reasons out of their control (i.e. illness, moving etc., documentation required), a prorated credit will be assigned for the following year or fee waived for fall league.

The Amateur Athletic Union is a national organization dedicated to sports and physical fitness programs that has been the leader in amateur athletics for almost 100 years. Almost every NBA and WNBA player from this country played AAU basketball. For further information on AAU go to our links page.

It is one of the most successful Girls’ AAU Basketball Clubs in the country, having won 3 AAU National championships. It has been in existence for over 25 years. Fencor has a well-deserved reputation for developing players, having the best coaches and putting the players in the best possible circumstances for college exposure. The name comes from a company called Fencor Graphics that was an original sponsor. Fencor has players who have reached the highest levels of pro and college basketball. See the Alumnae page for more information.

How does my daughter make a Fencor team?

Simply register and come to the tryouts. Fencor holds open tryouts starting in December. No player is guaranteed a spot on a team going in. A player must appear at minimum one tryout to be eligible but, obviously, the more tryouts a player can make, the better a coach has to evaluate you.

How many teams are there?

There is at least one team per age group, with more possible based on turnout. Following the national trend, we no longer have ‘A’ and ‘B’ teams. Teams will be named after the coach. Fencor feels all their teams are an ‘A’ level compared to the competition.

How is the eligibility for each team determined?

Each team is grouped by school grade. A player can ‘play down’ if their birthday was after Sept. 1 of a particular year. A parent can check with Fencor office on age or grade eligibility.

What happens when tryouts conflict with other games?

We attempt to hold tryouts where there is the least conflict but realize someone could have a high school team commitment,  travel or CYO game conflict. Please communicate with the person running tryouts or the Fencor office if going to miss a tryout in advance and it will not be held against you.

What is involved in the commitment to a Fencor team?

It is expected that a player will make all the games and practices unless the coach is notified beforehand. There are always conflicts but absences disrupt the team and are unfair to the other players, coaches and teammates. Communication with the coaches is crucial about these issues if there will be an absence.

What about the time involved?

Every team is different, in general there are usually about 3 hours of practice a week . The large majority of the practices take place in Montgomery County. Teams on average play in 4 to 10 weekend tournaments during the spring/summer but the exact number is determined by the coach in consultation with parents. 90% of the tournaments are within easy driving distance. Older age groups will have a specialized schedule due to college showcases, as the dates for many of their tournaments is determined by the NCAA.

How much playing time will my daughter receive in a game?

The coach determines the playing time for all players. However, as long as the player has been a good citizen and attended most practices, they should receive a minimum of 25% per game on average during the course of an entire tournament. This rule is not in effect for championship games or any official AAU championship events.

Is there fundraising for that kind of thing?

Each team does its own fundraising which is coordinated by the Team Manager who is a volunteer parent that coordinates all the non-coaching issues. Fencor offers fundraising opportunities through managing a gym during tournaments and encourages teams to participate.

What are the qualifications to be a Fencor Coach?

The club looks for people that: can meet the demanding time commitment, have some knowledge of the game from playing and/or coaching, and can organize and manage practices and games. Different age levels clearly need coaches with different abilities, experiences, and outlooks. The club requires a Criminal Background Check and Child Abuse History Clearance for each potential coach. As a general rule, a parent does not coach a Fencor team with his or her child on that team. If interested in being a Fencor coach, email fencoraau@yahoo.com

How many tournaments does Fencor pay for? What if team wants to play more?

Fencor will pay for the entry fee the first five tournaments if the coach chooses to enter that many. Most teams prefer to extend their season and play more. To save the parents money, as there are many times early bird discounts, Fencor fronts the money for entry fees for the extra tournaments and send the team an invoice for reimbursement. The cost of the added tournaments are usually paid for by dividing entry fees equally among the players’ families, minus team credit from fundraising, but a team can make its own rules. The Team Manager will receive the invoice and a deadline to pay in full, usually mid-June.

What about the coaches expenses?

Any team traveling to an overnight stay or longer tournament is responsible to pick up the cost of transportation, room, and board for a maximum of two coaches. Remember these coaches are volunteers and are not getting paid for all the time they put in.

The goals are; for each player to grow as a person and player, for the team to play as well as it can, and for everyone to have some fun. Beyond that, Fencor wants to provide appropriate opportunities for the older players to receive “exposure” to college coaches and to give the best possible coaching for younger players so they can succeed at the middle and high school level.