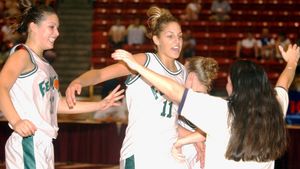 The title is Fencor’s second age group national crown in the past three years and the loss denied Kenner of a 10th title since 1992. 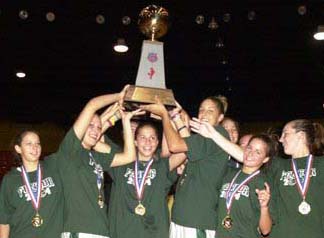 DelleDonne was clearly the marquee attraction, scoring 45 points in a 79-75 overtime win over the Tulsa Swoosh in the semifinal game Thursday morning and adding 25 in the championship game. Already gaining much attention nationally, the 14-year-old from Centerville, Del., finished with 268 points in Fencor’s 10 wins and scored more than 30 points in four games with 20-plus in another four.

But there were other stars, too, for Fencor in the title contest.

Kenner coach Alan Frey alluded to that when he said, “Elena is marvelous. I can’t think of any other player with similar skills at this age other than Simone Augustus of Baton Rouge.

“But despite Elena, the real key to this game may well have been how many big plays they got from other girls,” said Frey, who has led Kenner to five previous national crowns.

Lindsay Kimmell provided a huge lift for Fencor with 24 points, including a 3-pointer and four free throws in the final two minutes.
Also, diminutive guard Colleen Magarity came off the bench to hit key 3-pointers in both halves.

She dropped a bomb first with 2:20 left in the initial half while DelleDonne was on the bench for a brief rest, and then again with 3:20 left in the game when Kenner had sliced Fencor’s lead to a mere two points at 55-53.

DelleDonne said, “It was totally a team effort. Everybody came through. We love each other so much and just won’t let each other down.”
About her own achievements, DelleDonne said, “I don’t care about the individual publicity. The fun is winning with a team. Nothing equals this feeling.”

DelleDonne also said, “This is really for Caroline,” referring to Caroline Doty, who sat on the sideline with a cast on her left leg.
The team’s point guard, No. 2 scorer and an AAU Junior Olympics selection like DelleDonne, Doty suffered a fracture of her left fibula nine days before the national tourney and can’t return to basketball until September.

“She has remained so much a part of our team,” DelleDonne said. “She became like another coach and she constantly lifted our spirits.”

The entire team wore warmup jerseys with “Doty, No. 5” on the back.

Magarity’s trey moved the gap back up to 29-20 before Kenner’s Lyndra Bell scored for a 29-22 halftime.

Kenner grabbed the upper hand early in the second half, forcing five quick Fencor turnovers while following the offensive work of point guard Caitlin Cleveland and wing Tiffany Aidoo to grab a 37-35 lead with 12:58 left in the game.

Cleveland finished with 17 points and Aidoo added 16 for the Angels.

The Louisiana crew increased its lead to 42-37 when Cleveland hit a 3-pointer and Aidoo canned a short jumper at 10:38.
But Kimmell sandwiched a rebound-put-back and trey around teammate Rosie Tarnowski’s bucket to put Fencor back on top 44-42.
Kenner tied it once more seconds later and got to within two points twice down the stretch before Kimmell and DelleDonne closed the door in the final two minutes.

“I feel such great joy for these kids,” Fencor coach Veronica Algeo said. “When Caroline went down before the tournament, it presented major problems because she did so much for us.

“But this team never stops amazing me. They seemed to gain strength from adversity. They grew closer and everyone elevated their game. Nothing is more important than team chemistry and this group had it,” Algeo said.

“Kenner is an outstanding team and Alan did a great coaching job today. He really presented us problems by sticking with his big lineup so much.

“But our kids adjust so well. They have terrific basketball IQs and it makes everything so much easier. This has been a dream,” she said.
Source: http://eteamz.active.com/fencor1989/news/index.cfm