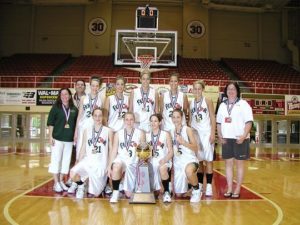 Top-seeded Fencor (Pa.) left little doubt who was the best team at this year’s AAU 15U Girls National Basketball Championships. It wasn’t easy, but Fencor got it done by topping the third-seeded Fairfax (Va.) Stars 78-67 in the championship game at the Dunn Center on Wednesday afternoon.

The win marks Fencor’s second consecutive national championship and third overall. Fencor won the 12U title in 2002 and its fourth straight trip to an AAU final. Fencor played the Stars in the 13U championship game, which the Stars won in 2003.

“It’s really a special moment for these girls,” Fencor coach Veronica Algeo said. “No core group of girls have ever won three national titles, and we’re going to try to make history by winning three. They challenged themselves a lot to get better the whole tournament. Really, anything less than winning a national title was going to be a failure.”

And it certainly helps to have an athlete like Fencor’s Elena Delle Donne leading the way. The No. 1-ranked player in her age group showed why she’s received such billing by dropping a game-high 40 points. Caroline Doty added 14 points and Lindsay Kimmel had 12. “It’s a great feeling,” Delle Donne said. “Each win felt great, and none was better than the other. It feels amazing to repeat also.” Delle Donne’s worth was really displayed as she scored 18 of Fencor’s last 28 points. “I just did what I had to do,” Delle Donne said. “That’s pretty much it. When my team needs me, I want to step up for them, and thank God I was able to.”

But Delle Donne wasn’t the only scorcher on the court. Fairfax’s Jasmine Thomas, who was the 2005 Virginia high school basketball player of the year as a sophomore, did what she could for the Stars with her team-high 29 points. Chalysa Shegog had 16 points for the Stars and Taneisha Harrison chipped in eight. Thomas scored 21 of the Stars’ final 31 points, including a pair of 3-pointers at the end of the game. “We came in with a game plan, but they were too tough,” Thomas said. “We tried to bring our A-game. We both had two games before this, so there were some tired legs. But we’re a good team and we’ll be back.”

Both coaches enjoyed watching the show Delle Donne and Thomas put on. “It was a lot of fun,” Fairfax coach Aggie McCormick-Dix said. “They’re two completely different players, too. The kids and players who were watching in the stands got to see the best. If you are trying to reach a goal or have a dream, you have to understand this just doesn’t happen. These girls have been playing since they were 9 years old, and their work paid off here.”

“I’m sure ESPN was sorry they weren’t here to see that,” Algeo said. “Really, when you think about it, you have two great teams going against each other. And each team has two girls who were selected in the top 20 in the nation by Nike for all high school players in the nation. So there are the marquee names for each side. And then you step up and each team is playing great and each marquee player is playing well, it’s great for the fans and players to watch.”

Fencor took control of the game with a 16-4 run in the second half, that put Fencor up 68-52 on Shannon Ferguson’s putback with 3:56 to play.

James D. Horne covers prep sports for The Leaf-Chronicle and can be reached by e-mail at jameshorne@theleafchroincle.com.